Taking a cue from TIOBE, where you can take Google search results and make them mean anything that you want them to, I decided that I was going to try an experiment and see if I could discern, from Google search results, how likely a programmer for a given language would engage in ass-hattery.

In short, this is the most important programming index you will ever see.  And unlike many other indexes I will put my hastily concocted formula up front and center for your enjoyment and ridicule.

I got Google results for PHP, Ruby On Rails, Java, Python, C, C++, Objective-C, C# and JavaScript.  I took the language score from Lang Pop.  The language popularity values for each of the programming languages is

The theory is that the louder one talks compared to their actual popularity the more likely they will engage in ass-hattery.

The results for the First Annual Report on Programmer Ass-hattery are: 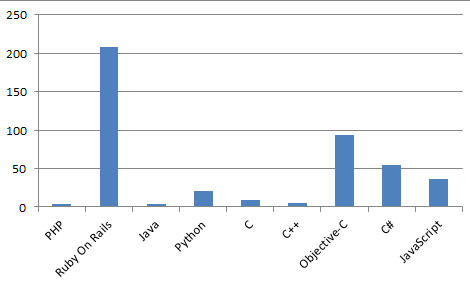 It’s math so it can’t be wrong.

Comments proving ass-hattery will either be deleted or ridiculed.  This was meant as fun (unlike some other indexes).